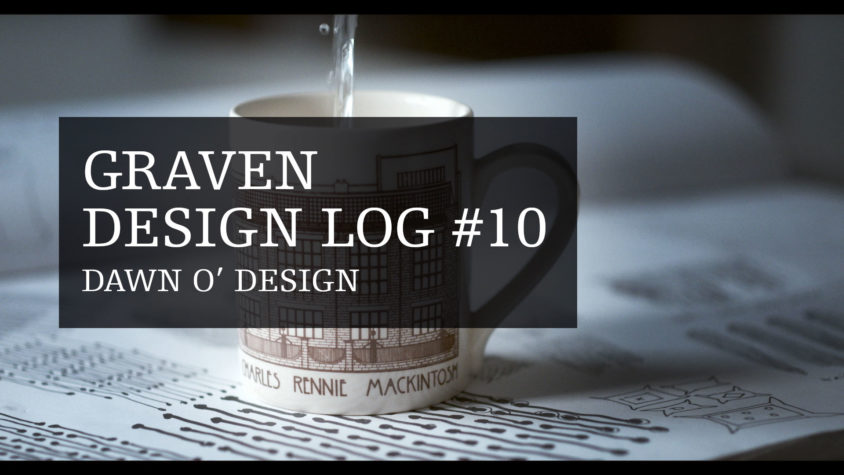 The series is supported by Ambiente, the world’s largest consumer goods trade fair held in Frankfurt in February 2017. For Ambiente 2017 Graven Creative Director Janice Kirkpatrick will design and curate the UK Partner Country exhibition that is the centrepiece for the trade fair.

No stranger to broadcasting, Janice, has written and presented ten one-minute films in which she explains the primary role of design in creating the products, businesses and brands that are the bedrock of successful economies. She speaks from her 30 years’ experience as an international designer working with clients and projects from a range of business sectors worldwide.

Commenting on the series, Janice said: “Whatever the outcome of Brexit the UK must look to itself to grow its economy, and design has a critical part to play in that. Just like primary industry sectors, such as Oil & Gas or Agriculture, the process of design allows us to create something of value using only our grey matter, skills and experience.

We can also create a design-led vision of our future by learning from our past. During the 18th C Industrial Revolution the UK government created schools of design, producing generations of creative professionals who converted new technologies into manufactured products that were exported and that revolutionised the world. These distinguished schools still exist in Scotland and the UK and they can be focused once again to support economic growth.

Every day for the last 30 years I’ve been using my design education to help businesses, people and places flourish. I’ve also been using the language of branding to grow start-ups and build high value and strong market positions for both places and businesses. Contrary to what many people believe, being a designer is hard work and not a typical celebrity lifestyle! I wanted to use Graven Design Log to explain what design is, why it’s critically import for the future success of the UK and what it can do to help UK businesses compete successfully with those elsewhere in the world”.

Nicolette Naumann, Vice President Ambiente, Messe Frankfurt Exhibition GmbH said: “We’re proud to support Graven Design Logs. They are perfect for our international audience as they reflect the scope and reach of Ambiente. We were surprised about the ambitious proposal but knew that it would be an excellent opportunity to provide some valuable and rare insights to design process that many people do not have access to.”

Graven Design Log #01 ‘The Meaning of Cheese’ festively features Harry the Turophile Turkey and Barwheys dairy to explain the valuable role that provenance plays in building durable brands that stand the test of time. Ayrshire-based cheese-maker Tricia Bey exemplifies how a business can use traditional methods to lever the provenance of a place such as Ayrshire—using a 350 year-old farm and a 200 year-old cattle breed to create exemplary products that are much sought-after by today’s Michelin-starred chefs and foodies.

Graven Design Logs are shot in the beautiful Carrick area of south Ayrshire in SW Scotland. The series was produced by Fiona White and filmed and directed by David Council with an original soundtrack by composer Brian McAlpine. Graven Design Log is delivered in partnership with communications consultancy, Spreng Thomson.

About Ambiente, the leading international trade fair
Ambiente is the world’s leading international trade fair for products for the table, kitchen and household, gift articles, jewellery and fashion requisites, as well as decorative products, interior design concepts and furnishing accessories. Ambiente is ‘The Show’ for the entire sector and, thanks to its unique horizontal and vertical range of products, unrivalled worldwide. For five days in early 2016, some 4,400 exhibitors showed their new products and innovations for the coming season to 137,000 trade visitors from almost 150 countries. The world’s leading consumer-goods fair is also distinguished by a wide variety of events, promotional programmes, trend presentations and awards ceremonies.

For more information, please visit their website at: www.ambiente.messefrankfurt.com

Background information on Messe Frankfurt
Messe Frankfurt is one of the world’s leading trade fair organisers, generating more than €640 million in sales and employing 2,364* people. The Messe Frankfurt Group has a global network of 30 subsidiaries and 55 international Sales Partners, allowing it to serve its customers on location in 175 countries. Messe Frankfurt events take place at approx. 50 locations around the globe. In 2016, Messe Frankfurt organised a total of 138* trade fairs, of which more than half took place outside Germany.
Comprising an area of 592,127 square metres, Messe Frankfurt’s exhibition grounds are home to ten exhibition halls. The company also operates two congress centres. The historic Festhalle, one of the most popular venues in Germany, plays host to events of all kinds. Messe Frankfurt is publicly owned, with the City of Frankfurt holding 60 percent and the State of Hesse 40 percent.

For more information, please visit their website at: www.messefrankfurt.com